Your life is cool, you should track it as you progress through it!

First, a short introduction/explanation of what this is for. Often, when people ask me what I’ve been up to over a given span of time, usually someone I haven’t seen in a while, I pause before saying anything, with my mind completely empty of any ideas for what I could possibly say back. There are just so many times when I look back and I realize that I have no idea what I’ve spent my time doing. And that’s not a fun feeling. My last winter break was an incredibly fun time — I did everything I could to make the most of the three weeks I had back home and made some fantastic memories with a number of my closest friends. Yet one evening, amidst all of these happy emotions, I found myself having a brief existential crisis. Somehow, all of a sudden, it dawned upon me just how little of our lives we are actually able to remember, and I did not handle this thought gracefully. I panicked for maybe thirty minutes, disturbed by the fallibility of human memory and the fact that no matter what I did, there would be no avoiding the inevitable outcome that many things I would certainly wish to remember would be forever lost from recollection. I am eternally grateful to my past self, because in that exact moment of panic, I managed to take and save a picture of me losing my grasp on reality. 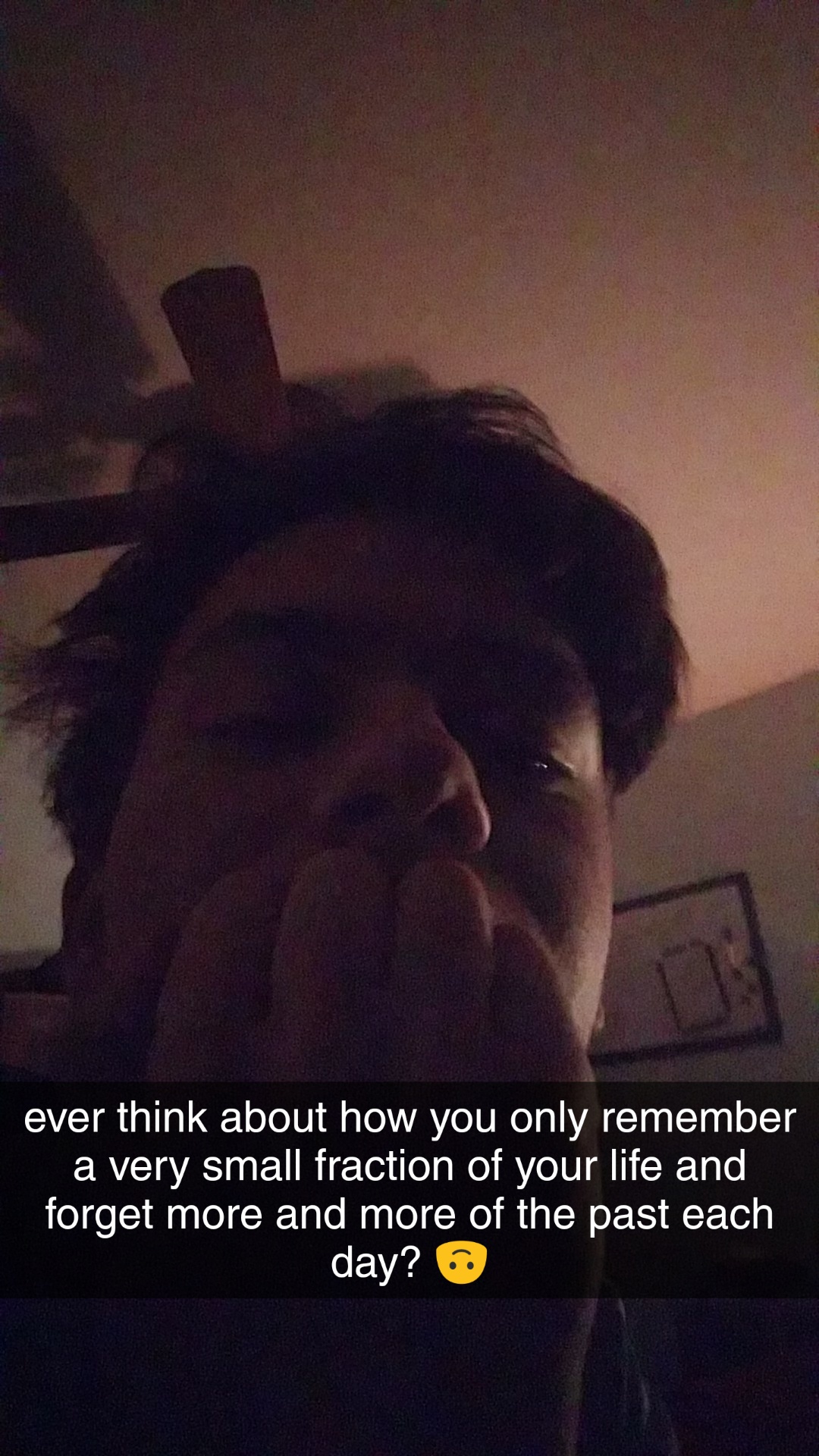 Now, the core of what I was realizing seems fairly obvious - yes, our memories aren’t perfect, and I’d been forgetting things for years and years before I freaked out over it. Clearly, that particular moment was not the first time I’d ever had a thought like that. But it was what stuck with me, which serves to reinforce my point about the strange way the human memory works. And I’ve had a few other such occasions recently where it feels like I’m finally reaching an eye-opening point I had definitely thought somewhat about before. For example, a few weeks ago I learned about all of the effort that the company I’m interning at puts into building a great culture for all of the employees. Which led me to feel mind-blown that the exact sort of questions they were asking about how to form a good culture, how people think, can be changed, can grow to embrace diverse people and their different ways of thinking, were ones that were deeply fascinating to me. Now my major in cognitive studies finally began to feel like it made sense! It didn’t take me long to recognize that there was no way I decided to make this my major about a year ago without some consideration that probably led me to some of those exact same thoughts. Yet, with nothing to look back at, I have no recollection of what my progression through these thoughts over time actually looks like, and instead end up living my life feeling like every two weeks or so I completely rediscover some magical insight about how I should be thinking about my life.

A light at the end of the tunnel

Finally, last Sunday I managed to piece together a solution that could solve both of these problems simultaneously, as well as help me to make progress on other aspects of self-development I feel are important. The solution that came to me a couple of weeks ago as I thought about how difficult I’ve found it to put my life into perspective when people ask me what I’ve been up to, and it’s simply to keep a bi-monthly log of how the past two months have gone. This includes the current ways you’re seeing the world, what it is that has been on your mind, what you’ve done that you’re really proud of, what you feel needs work, and what you’re hoping to be able to say looking back after the next two months.

This method manages to provide you with a few different important benefits. First, you’ll have a better record of how your thinking about the world has changed over time, which can come in really handy when you’re trying to tell a story about who you are as a person to yourself or others in the future. Second, you’re reflecting on and keeping track of how you feel about the tasks and habits that make up your daily life. This lets you take account of what is and isn’t working about what you’ve been doing so it you can move forward into the future. Third, it lets you see where you’re struggling and succeeding over time. If there’s something that you’ve been mentioning several log entries in a row, it’s a clear signal that it’s time to make it a priority and possibly seek out further assistance for how to make improvements before the next two months have passed. And finally, all of these benefits come with the added distance from the insignificant details and practicality of implementation that the two month cycle brings.

Right now, I’m working on my first entry into my log and I’ll likely post my most insightful conclusions from it on a separate post in here. Since I haven’t done one so far yet this year, I’d like to have it cover my first half a year more broadly. Hopefully, it will be the first in a long line of these sorts of reviews — both for you and me.